As several key co-living players go global and numerous innovators open up in every conceivable niche, Frame’s Nov/Dec issue takes another look at the form of urban organization that trades personal space for common amenities.

In Practice
Döppel Studio on the difficulty of defining its identity. Ramona Bronkar Bannayan on pushing MoMA to its limits. Suchi Reddy on identifying the science of aesthetics. Axel Arigato’s Max Svärdh on building a cult sneaker brand.

Spaces
The agile workspace gets a radical new form. Exhibition designers break the museum’s fourth wall. Why Chinese hospitality is swimming in surrealism. Housing helps to treat the symptoms of dementia.

Co-living Lab
Yet another typology arising from the burgeoning sharing economy, co-living is seemingly cropping up on every corner of every city. The number of units offered by major co-living companies in the US alone is reportedly set to triple in the next few years. With the category still in its relative infancy, we assess the current challenges – and offer directions for the future.

5 stars based on 3 reviews 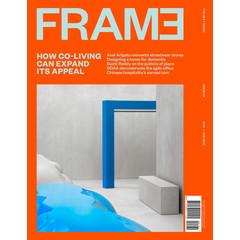